Book Review: Pivot – Real Cut Through Stories by Experts at the Frontline of Agility and Transformation

This was an alright read. Some of the contributions I thought were a bit on the theoretical side which wasn't what I was expecting judging by the title but there were some good real life examples mixed in. Some of the points that stood out for me were (1) the importance of differentiating between Agile the process and agility as a mindset, (2) understanding that being agile and willing to change a product's direction is a good thing but changing direction doesn't come for free and (3) having a hero culture in an organisation is bad without exception.

Below is a small selection of excerpts from the book:

"Having even just a few people in hero positions can be a sign of bad leadership."

"Leaders should foster environments where the team as a whole is valued and appreciated. It is not to say that we shouldn't acknowledge individual efforts. After a job well done and recognising the team, if you feel someone deserves more, tell them in person."

"I recommend replacing the demand for heroism and sacrifice to setting a goal of sustainable goals. As a result, the team becomes confident in their abilities without the hero of the team."

"The traditional image of heroism does not fit all-stars agile team."

"A leader should be equipped to spot both a culture of hero worship and individuals who engage in self-sacrificial behaviour at the cost of long-term sustainability."

"Knowing your organisations purpose and creating a unified vision spanning organisational silo together with cross-team collaboration is essential to delivering value and maintaining market relevance. Nokia's high performing Agile teams, did not stop it from losing huge market share to Apple and Google in the upper end of the smart phone market.  Being Agile is not enough."

"There is no world where feedback doesn't take time to implement. If this is a project with an agreed delivery date, when the client gives you feedback, you need to manage expectations and move the goalposts. Change doesn't come for free. Adapting to change is a two-way thing."

Think of a test double as a pretend object used in place of a real object for testing purposes. Below are four kinds of test doubles that you will encounter.


(Source: The Well-Grounded Java Developer, by Benjamin J. Evans and Martijn Verburg)
Posted by adil at 17:00 No comments: 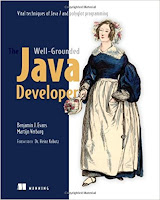 Although Java 9 is now out and this book was written way back when Java 7 was new I still found this to be a very useful and educational read. The book explains the fundamentals of the Java platform (e.g. bytecode, garbage collection) and programming principles in general (e.g. concurrency, dependency injection, functional programming) in a way that I've not seen in any other book. The introduction and contrast of the Groovy, Scala and Clojure JVM languages I also thought was done well. Some aspects of the book are now dated but it's still worthwhile skimming over for a historical context of how the platform has developed. If you're new to programming and new to Java development however this probably isn't the right book to start with.
Posted by adil at 11:23 No comments: